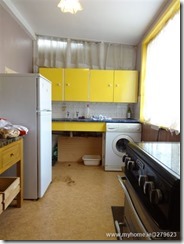 Here is what the extension at the back of the house looked like in the For Sale advert…Not too bad, until a close look at the heavily painted wooden window frame on the right revealed a thriving colony of creepy crawlies in every angle,with glass ready to drop out onto the floor.

What you can’t see is a daisy chain of plugboards going round the room to the cooker.

The yellow cupboards were also crawling inside. The top of the cupboards were at  my eye level, clearly built to suit somebody of less than 5 feet tall. At night, snails would be crawling round the sink.

You can’t see it, but the wall at the right is the original exterior wall, pebble dash had been plastered over and painted the colour of week old mushroom soup.  The original Weatherglaze steel window frame was still  in place.

The main light would switch on and off by itself. The washing machine seen at the back would advance out to the centre of the room on the odd occasion when it deigned to work..

Posted by Yours truly, confused, at 7:48 PM No comments: 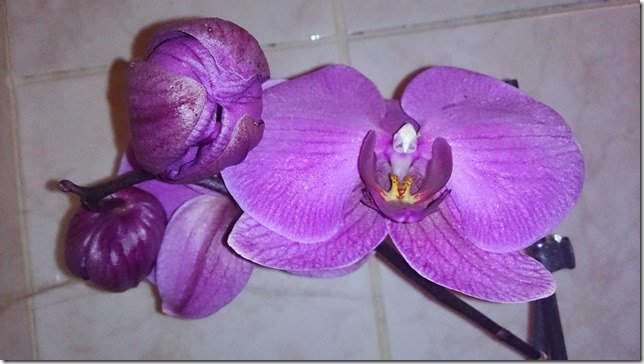 This orchid was found in a supermarket dumper, probably chucked because it had dropped all it’s flowers.  Six weeks in my houseplant intensive care unit (a.k.a. the bathroom) and this is what I got.

Posted by Yours truly, confused, at 11:27 PM No comments:

Today is your lucky day. You get three wishes, granted to you by The Daily Post. What are your three wishes and why?

Usually I post responses to these prompts on Occasional Stuff, but today I want to talk about three wishes that would lead to some home improvement in Baskerville Manor.  So here goes:

The magical person from Wordpress has scattered the stardust and made his/her offer.  These wishes will have no strings attached and no animals will be harmed in the making of the necessary spells.

Doorways and passages will expand and contract relative to the aggregate width of canine and feline companions as they escort me around Baskerville Manor.

I will be granted the magical engineering skills to build that doohickey I speculated about in Daily Prompt: World’s Best Widget.

Posted by Yours truly, confused, at 8:20 PM No comments:

Email ThisBlogThis!Share to TwitterShare to FacebookShare to Pinterest
Labels: Livestock

Write Recipes on Jars for Easy Make-Ahead Mixes
Posted by Yours truly, confused, at 9:32 PM No comments:

Posted by Yours truly, confused, at 12:45 AM No comments:

Why cats came to Baskerville Manor

As far as I know, nobody in my family, not parents, aunts, uncles, ever owned a cat until my niece adopted a beautiful smoky grey long hair who started as an adorable kitten and decamped to a more attractive home next door as soon as he reached adulthood.  She was nonplussed by his lack of fidelity, having being raised, like myself, with a confident expectation of the unadulterated adoration delivered by the line of much-loved canines who had filled our homes with love, fun, half-buried bones and hair throughout the years.

So why, you might ask, did I adopt two cats?  Well, the situation is this – Baskerville Manor is one of those late 1950’s houses that were built with those open-type cement blocks.  We always had the odd mouse, which was summarily dealt with.  Over time, the house got older, wear and tear set in and eventually we were flooded twice in two years.  It was like giving mice a VIP  “Access All Areas” pass. The open cement blocks provided a highway to heaven as far as they were concerned.  As time went by and the family grew up the number of people in the house dwindled until there were just two, and then one person living in it. There are three elderly canines so most of the time, it is really quiet.  Ideal mouse territory.

As the mouse population increased, they got bolder.  First it sounded like there was one or maybe two, tap-dancing behind the skirting boards in the kitchen. Then they began to tramp around the whole house as though they were wearing heavy-duty work boots.  They danced on the kitchen worktops. They worked their way into sacks of dog food, and left their calling cards everywhere.

I can deal with the odd mousetrap, but I don’t have the heart for mass murder.  I tried the humane traps, which caused hysteria among the dogs. There was also the problem of where to take the wee not-so cowering and not so timorous beasties when I caught them – dump them at the end of the back garden and they saw it as a nice day out with a handy hike home.  Put them in the car and drive somewhere to dump them?  Not likely, they would probably end up infesting the car too.

The next thing I resorted to was the magic plug in sonic thing, and for one glorious winter, they seemed to have backed off, but by August 2013 I was finding the familiar little trails in all sorts of places – nowhere was safe.  There was mouse poop on the sonic device.  The last straw landed one Saturday morning in early October.  Looking forward to a nice cup of coffee and some toast, I opened the breadbin and found five of the little horrors munching on the last two slices of bread. They didn’t even have the grace to scatter – they sat and looked at me and were only short of giving me the finger.  True Northside mice.

When I recovered from that I went upstairs to get dressed and found another bunch of them having a party in my underwear drawer.  So it was time to bring in the special forces.   Decision made, the existing population of critters was going to expand.

New correspondents to Baskerville Manor, Mr Kit-Kat and Little Jet-Black will be relating their stories and giving their impressions of life as Baskerville Beasties on their own pages over the next few weeks.

Posted by Yours truly, confused, at 11:45 PM No comments:

Just taking a look around…

Posted by Yours truly, confused, at 5:01 PM No comments:

Previously on Adventures in Home Improvement...

Who is this person?

Yours truly, confused,
Dublin, Ireland
Proud to be a geek