Following up from Tuesday’s post.  So far no reply from DCC but Andrew Montague’s office sent me the following yesterday:

I refer to your recent e-mail to the Lord Mayor of Dublin, Andrew Montague, regarding unnotified road works at Maryfield Crescent, Artane. The Lord Mayor has made enquiries with the North Central Area Office on your behalf and has received the following reply & apology from Shane Satell, Executive Engineer, on behalf of the Road Maintenance Division:

Road Maintenance carried out works at Maryfield Crescent in the last number of days. All works except a couple of minor snag issues were completed yesterday. It is our policy to advise residents when works will take place which will effect access and egress from their property. This did not happen in the case of Ms Donegan. Road Maintenance services would like to apologise for all inconvenience and distress caused during works at this location.

The Lord Mayor and the Road Maintenance Division will do their utmost to ensure that this situation does not reoccur. I do hope that your driveway is accessible again - please do not hesitate to contact this office should you have any further enquiries.

Unfortunately it seems that the respondent failed to mention a few things…. 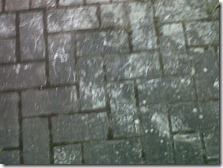 The driveway was still blocked on Wednesday morning.

Concrete spatters in my gateway, along the outside of the garden wall, across the middle of the drive.

Having taken some time on Wednesday morning to talk to the workmen, I was told that my nephew had given permission to block the gateway and that my car would not be moving. Not true, he told them his car (currently being re-built) would not be moving, but I needed mine!

The next-door neighbours had also complained by phone (they somehow got hold of a mobile number that somebody would answer).  They  had to ask for the pathway outside their house to be re-done as the kerb ran half-way across their entry and they could not get into their drive without swerving across the street.  And …. their recently repainted black cobblelock now looks remarkably like a dalmation in reverse

When next-door’s dad spoke to workmen he was told his son had been informed and had agreed to being blocked in – also not true.

Previously on Adventures in Home Improvement...

Who is this person?

Yours truly, confused,
Dublin, Ireland
Proud to be a geek